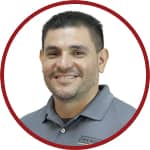 Born and raised in Chicago "Little Village” on the South Side of the city, Charlie Gradilla is a proud father of three children and holds an Associate Degree in Applied Science. Charlie previously worked for Motorola for ten years before being hired by Trendler. Charlie’s coworkers describe him as easy to work with, open-minded, honest, and to the point.

Q. Tell me a little more about your role, what does a typical day look like?

‍I began my career with Trendler in April 2014 as a Welder and quickly moved up the ranks. I have held positions as a Paint Lead, Assembly Lead, Packaging Lead, and Stain Lead.

In 2017, I was promoted to Production Supervisor, and in 2019, I became Production Scheduler. In April of 2021, Trendler had a Customer Service Representative opening, and I knew I was ready for new challenges serving Trendler Customers.

Q. What makes you excited to come to work every day?

‍I enjoy Trendler's culture because it has allowed me to learn and grow as an individual. As a younger man, I had made some bad decisions and spent some time in prison, but Trendler gave me a second chance in life, and I wanted to show my true potential! My father, Juan Gradilla, was a 40 year veteran of Trendler's production team.

Q. Outside of the office what do you like to do?

‍In my free time, I like to work out and stay in shape. I enjoy Social Media platforms, especially creating Tik Tok videos for fun. I'm focused on being able to retire and leave something for the next generation.